Every year thousands of people are killed and tens of thousands of people are injured in 18 wheeler accidents and U-Haul accidents. Accidents involving big commercial trucks are different than your average car accident. Because these trucks are so big and often carry heavy loads, accidents often result in catastrophic injuries and property damage. There are many federal rules that regulate the trucking industry. These regulations may have an impact on any injury claims.

Types of Problems in 18 Wheeler Accidents

Unlike most car accidents, 18 wheeler accidents involve a company as well as a driver. Companies are responsible for the actions of their drivers while the driver is on duty. Instead of making a claim with a person’s auto insurance, you have to make a claim against either the company or with the company’s commercial driver’s insurance company. 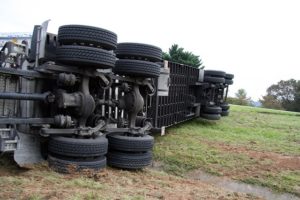 Federal regulations require that drivers get certain amounts of rest. They also require detailed logs showing how many hours the driver has been on duty, when and where the driver rested, and information about the cargo. Many large commercial trucks also contain a device similar to a black box in airplanes that records vital data about the operation of the truck.

A skilled personal injury lawyer with experience in 18 wheeler accidents will know how to file a claim with the right party and how to carefully gather all the data and information about the crash.

How to Make a Claim for a Truck Accident

While drivers of big commercial trucks have a duty to exchange information at an accident scene, often this does not happen in 18 wheeler accidents because the damage is so huge and the danger so high that everyone is whisked quickly away from the accident scene. 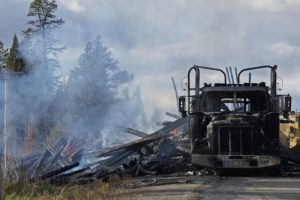 Usually law enforcement will file a report and make sure everyone involved in the crash has the information they will need to make a claim against the truck company.

Like all personal injury claims, when opening a claim in an 18 wheeler accident case it’s important to understand that anything you say can be used against you. Neither the company nor the insurance company want to pay out more money they have to.

Usually the best way to make sure the claim is filed properly and to ensure you get the compensation you deserve is to speak with a lawyer as soon after the accident as possible.

What is Comparative Negligence?

In many states if both drivers share responsibility for causing the accident it can reduce or even eliminate the obligation of one side to pay damages to the other party. This is called comparative negligence. The most common way comparative negligence works is that nobody can collect damages from another party if they are 50% or more responsible for the accident. If you are less than 50% responsible you can collect damages, but those damages will be reduced by the percentage of fault you had in the accident.

Here are some examples of how that would work: 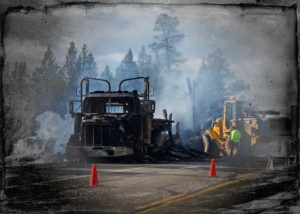 Jenifer was involved in an accident with an 18 wheeler. She was found to 50% at fault for the accident. Her damaged were $10,000. Because she was 50% at fault, she cannot collect any damages from the driver of the truck or the company or the trucking company’s insurance company.

Each state has its own unique spin on how comparative negligence works. Make sure to check with an experienced 18 wheeler accident lawyer before making any decisions about your claim.

Is the Company at Fault?

The company that owns the truck and employs the driver will be responsible for the actions of the driver. While most will have insurance to cover accidents, the company itself may end up having to pay some damages.

If a company is found to have created or encouraged an unsafe work environment and has a pattern and practice of such behavior, the company itself may be ordered to pay punitive damages. These are a special kind of damages that are designed to punish bad behavior.

What if Driver is an Independent Driver and Operator?

Not all 18 wheelers are owned by big companies, some are driven by independent owners and operators. This means a person owns their own truck and contracts out with companies to haul for them.

These commercial drivers are required to carry commercial insurance. Dealing with independent owners and operators usually means just dealing with their insurance carrier.

If you have been involved in an 18 wheeler accident, let us help you find the right lawyer to help you win the compensation you deserve.