In most major American cities, taxi cabs are a regular presence on the streets, moving people across the city. But the more taxi cabs a city has, the more taxi accidents there will be. Just like with regular car accidents, if you’ve been hurt because of someone else’s negligence, you have a right to get compensated. But, that is sometimes easier said than done in taxi accidents.

If you are in car accident and the other car is a taxi cab, you need to get as much information at the accident scene as possible. Like all car crashes, the insurance company for the driver who is at fault for the accident will have to pay the damages of everyone involved, up to the insurance limits. 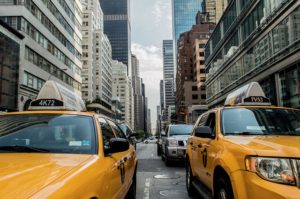 Most jurisdictions require that taxi cabs carry a certain amount of insurance. A company that pays the insurance premiums for its drivers owns most taxis. If a claim or lawsuit is made, it will usually be against the taxi company instead of the individual driver.

Just because the other car is a taxi cab doesn’t mean the taxi driver was the one at fault. You will still need to prove the driver of the taxi cab was negligent in some way.

If you were a passenger in a car that was in an accident with a taxi cab, you won’t have any fault in the accident, but you will have to decide if you go after both the taxi cab company and the driver of the vehicle you were in, or just one of them. If you chose poorly you could end up without any kind of recovery.

If you were the passenger in a taxi cab and the cab is involved in an accident with another car, you are in the same position as any passenger in a car accident.

A skilled and experienced personal injury lawyer will know how to deal with issues involving more than one possible negligent driver. It is too complicated a situation to try and navigate alone.

All car accidents, including taxi accidents, are a matter of answering the same two basic questions:

If the driver of the taxi cab was negligent, than the taxi company will be responsible for paying for your damages. But, if you were not hurt, there are no damages to pay for.

In some cases in may be possible that only the individual taxi driver is responsible for the injuries. This could be the case if the taxi cab is independently owned. In some states it could be the case if the taxi driver uses the car for his own convenience when not on the clock. In either of these two cases, the driver should still have insurance to cover the damages.

But what happens when there is no insurance or not enough insurance coverage?

The two most common problems in taxi accidents are coverage issues and evidence issues.

Typical legal requirements for taxi cab insurance only require companies to have $250,000 limits on the policy. If there are multiple cars involved or several catastrophic injuries, that coverage may not be enough to cover all of the damages.

Likewise, if for some reason the driver or company does not have any insurance, you may have a problem getting paid. You could go after the driver individually, but most drivers do not have any assets, and you would never collect, even if you won a judgment.

The solution to coverage problems is to carry uninsured or underinsured motorist coverage. If the coverage in a taxi accident cannot pay you fully, you can file a claim against your own policy.

The best time to get evidence in taxi accidents is right after the accident happens. But, this also the time when your thinking is most clouded.

If possible, you should always try and exchange information with the drivers. You should also try and take pictures of the scene from as many angles as you can.

These pictures may enable a crash reconstruction later on. You should also try and get witness contact information. It is also a good idea to write down what you remember about the crash. Sometimes, you have to recall details months later when dealing with the claims process.

If you have been injured in a taxi accident, make sire your rights are protected. Contact a personal injury lawyer to make sure you get what you are owed. We can help you find a lawyer with experience in taxi accidents near you.