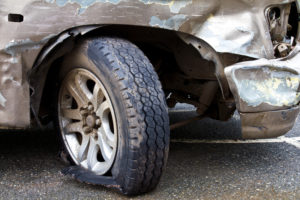 Vehicle rollover accidents account for a significant percentage of automobile and truck accidents each year and an even greater percentage of accidents involving fatalities. While the natural inclination is to view excessive vehicle speed and highway conditions as the most likely direct causes of fatal rollover accidents, very little attention has been directed at another problem that has only recently come to the attention of the driving public: tire “blowout” or, more properly, tire disintegration.

In the days before the first gasoline shortages of the late 1970s, tires were manufactured in two sections: an outer section, or tire body, and an inner section or tube that was inflated with air. The reason for this dual part construction was that the vehicles of that time were, on average, much heavier than today. These tires were simply longer lasting when used on heavier vehicles and some even say that they produced a smoother ride than today’s tubeless tires. As the country moved away from “gas guzzlers” to the lighter, more fuel-efficient cars and trucks of today, tire manufacturing firms realized that they could reduce their costs by making tires that were just a few millimeters thinner than before.

As is often the case when it came time to examine the cause of such accidents, automobile and tire manufacturers soon began round after round of blame shifting and finger pointing. Although this behavior has not yet ceased, it appears that both factions have their share of blame.

In what is probably the best known example of defective product / wrongful death litigation in the personal transportation industry, Ford recalled practically all of its pre-2001 Explorer and F-series models because of a high failure rate of its factory installed Bridgestone/Firestone tires. Firestone, in turn, alleged that its tire problems were related to the design of Ford’s trucks and in some cases juries accepted that argument. In later litigation, evidence of defects in tires manufactured by Michelin and Cooper Tire has emerged that defective tires may have contributed to other rollovers.

The battle of words and tire treads goes on and will almost certainly continue for the next few years. But for now, taking a look at the tires after an accident may be illuminating. If you or a loved one have been injured in a motor vehicle accident as a result of a tire blowout, you may have the right to a claim. Contact us today for a free case evaluation.